Nigerian letters are a type of computer fraud that aims to underhandedly get access to a user’s bank account or to extort money from them in a different way.

The standard theme exploited by Nigerian letters is the need to move large sums of cash internationally. A spammer usually tells an intriguing story about millions of Dollars he has acquired semi-legally. For example, these may be stolen foreign investments or UN grants. The spammer then goes on to explain why they cannot use their local bank and informs the recipient that they urgently need an account in a foreign bank where the ‘grey’ money could be transferred to. Another typical version is that the money has been earned legally or received from a will, but it is impossible to receive it in cash in that country due to the country’s political instability.

The recipient of a Nigerian letter is usually asked to provide assistance in obtaining the cash. In return they are offered a 10% to 30% reward.

It is assumed that the naive user will allow the fraudster access to their bank account for the purposes of carrying out the transaction. The result is predictable – all of the recipient’s money will be withdrawn from their bank account. Another trick that the fraudsters use is to ask for a small advance (usually several thousand Dollars) in order that the fraudster can ‘execute some necessary procedure’, with the promise of huge returns for the ‘lender’. Needless to say, they disappear as soon as they receive the money. Sometimes fraudsters even try to persuade a recipient to travel to Nigeria or somewhere similar, resulting in the victim being blackmailed or threatened.

This type of spam differs from the other types in that spammers have to keep up a correspondence with the recipients and this means that the fraudsters’ return address and sometimes even a telephone number is known and can easily be tracked down by law-enforcement agencies.

This type of spam is called ‘Nigerian’ as it was created in Nigeria. In 2005, local spammers even received a so-called Anti-Nobel prize in Literature. There is another name related to Nigeria which is used in English-language documents – Scam 419, where 419 is the number of the article in Nigerian legislation forbidding this type of fraud.

Why Nigeria? This country is reputed to be one of the world’s most corrupt. Twenty years of political chaos and military dictatorship have lead to a crime wave. Currently, Nigerian fraud is fourth in the world for the level of income received.

Thousands of people worldwide still get emails from ‘former dictators’, nonexistent Nigerian businessmen or clerks from Nigerian ministries. However Nigerian letters have long been sent by spammers from different countries.

Spammers react quickly to situations around the world, constantly searching for unstable zones. This is the reason for the appearance of Kenyan or Filipino letters. During the war in Iraq, spam mailings contained Iraqi letters with information about money stolen during military operations in that country. The authors of these letters usually sign them with fictitious names, or use the real names of senior Iraqi officials.

The majority of Nigerian spam is in English, but in 2004-2005 spammers started similar activities on the Russian Internet. The Russian language Nigerian spam exploits hot news from Russian political life. For example, the Yukos Oil affair was used by spammers who distributed an offer claiming that the recipient would be given a share of Khodorkovsky’s money in cash.

Nigerian letter with a “Russian accent” 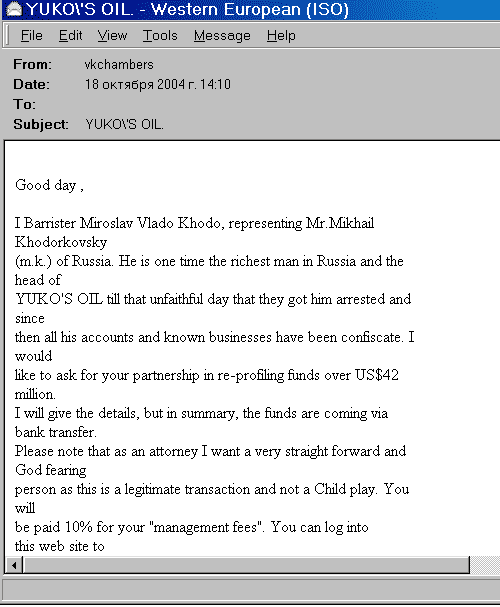 Sometimes you can find the odd masterpiece among Nigerian letters. They were obviously written by people with a sense of humor. Thousands of these letters are spread across the Internet, users themselves send them to each other as samples of a funny text. The most vivid example of such a ‘masterpiece’ is a ‘touching’ story about a Nigerian astronaut who 14 years ago was sent to the secret Soviet space station Soyuz and now the Russians refuse to bring him back to the Earth because it is too expensive. During all these years his salary has been transferred to his bank account and now the astronaut’s relatives ask for the users’ assistance in converting this astronomic sum into the cash needed to help him to return home. An attentive user will recognize the date of the letter’s first mailing – April of 2004 (April 12 is the Astronaut’s Day in Russia)

Below is the text of this remarkable Nigerian Letter