This type of scam is similar to the Nigerian email fraud. The idea is the same – fraudsters promise recipients the Moon trying to get access to their bank accounts or make them pay ‘initial expenses’.

Generally, the sum purportedly ‘won’ is over $500,000. The initial sum requested from the recipient of the email is a very small fraction when compared to the amount that they have ‘won’. The fraudsters usually ask for between several hundred and several thousand dollars on some pretext or other – this may be commission for the money transfer, a tax, the necessity to open a bank account, etc.

Unfortunately, very few ‘lucky winners’ are bothered by the fact that they never participated in the lottery in which they supposedly won these millions of Dollars. Fraudsters often don’t even bother to create a fake site for their lottery and it doesn’t occur to the naive ‘winner’ that notifications from a genuine lottery organizer will never be sent from a free email server. Neither will they be sent from addresses that look like random sequences (for example, ltfltdclasdf@yahoo.com).

Generally fake notifications ask a recipient to keep this information confidential (‘To avoid duplicate claims, you are advised to keep all winning lottery information and numbers private, in line with our company’s security protocol).

Before taking action to claim their prize, the ‘winners’ should pause for a moment and try to answer the following questions:

As per the Nigerian email fraud, fake notifications of lottery wins are mostly English-language messages, though there are also messages in French, German, Spanish and other languages, usually in the same format, with the text in these messages having been translated from the English-language originals using an online translator.

There are also Russian-language versions of such messages, but they are very rare.

An example of a fake English-language lottery notification 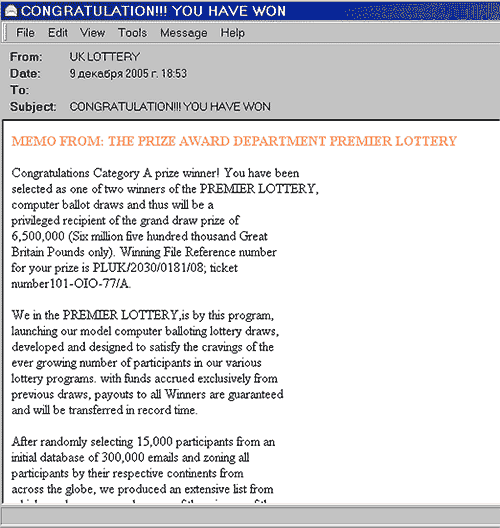 An example of a fake Russian-language lottery notification 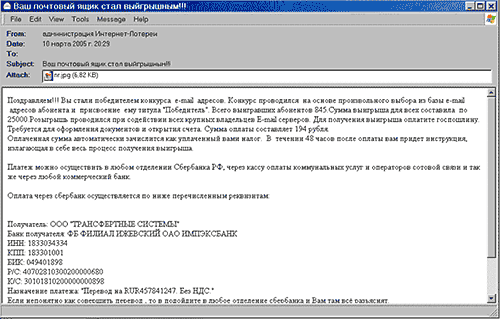